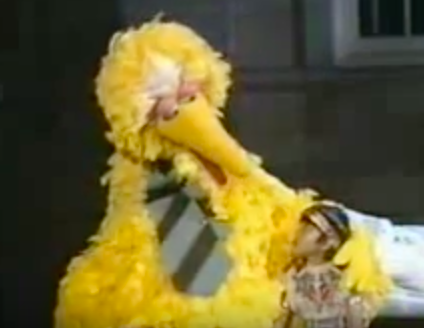 You’re gonna be a star
Shining in the sky
Bright and proud, way up high

[spoken] Why don’t you sing it along with me, okay?

Music and lyrics by Tony Geiss

For years, I thought this was just a sweet song, almost lullaby-like. I’m just now realizing how odd it is that Big Bird is helping a child die and comforting him about the afterlife. And he’s not comforting Sahu because Sahu is scared of the afterlife; no, Sahu is worried he’ll never get there, and Big Bird is like, of course you’re gonna die! We won’t give up until we help you do it.

Who approved this story line?

Granted, Sesame Street has never shied away from talking about difficult topics, like when Mr. Hooper died, or after September 11, 2001 or Hurricane Katrina.

I wonder if Don’t Eat the Pictures was always intended to have this thread of helping kids understand early death and making the idea less scary. My sister used to volunteer in the cancer ward of a children’s hospital, and now for the first time I’m wondering what media exist to help kids understand this stuff. If I’d trust anyone to make that kind of media, it’d be Sesame Street.

And another (much less important) thing! Sahu has been trapped in the Egyptian tomb for 4000 years, forced to guess the answer to the riddle, “Where does today meet yesterday?” The answer turns out to be “in a museum,” which is cool, but… did museums even exist 4000 years ago? Did ancient Egyptians have museums?

Okay, but who casts a “spell” (curse, more like) on a six-and-a-half-year-old, forcing him to guess a ridiculous riddle before he can be with his dead parents, all so that he understands the value of museums??

I HAVE SO MANY QUESTIONS.

Follow Our Muppet Melody on WordPress.com
Join 16 other followers